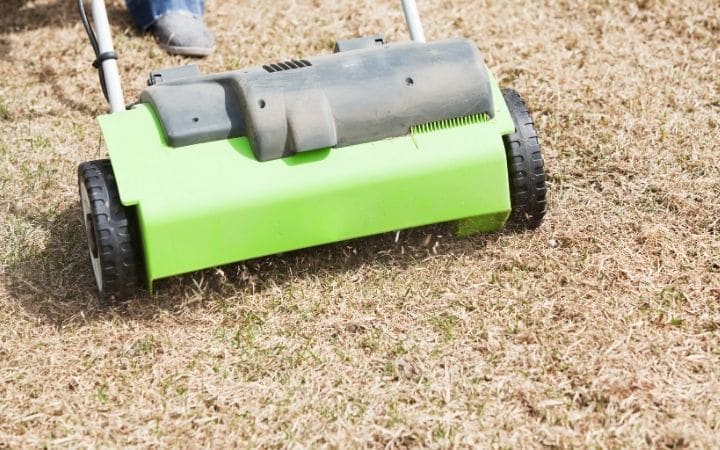 We all see lawns in parks or around buildings such as a house, office, apartments, or commercial premises. Gardens provide an enticing look, and people keep and maintain lawns for the scenic or recreational feel. However, this beautiful green requires a lot of work and focus on maintenance and keeping it in an appealing state.

Maintaining lawns has plenty of activities, including dethatching. So in this post, I’m going to detail about dethatching as a way of keeping your lawn healthy. The aim is to assist you in determining the best time to dethatch your lawn.

Understanding the term of dethatching

Before going any further, it’s pivotal for you to understand what thatch is and how it affects the lawn. Well, thatch is generally an accumulated layer of living or dead grass material. It forms at the bottom or base of the grass plant or lawn. It includes the grass shoots that have gathered up, the broken stems, and the roots of dead grass.

The more thatch accumulates on top of the soil surface, the more visual it gets even in the thick green grass. It is a result of slow decomposition of these materials while the buildup of these defective materials is faster, thickening the layer. And that’s where you should dethatch your lawn. Dethatching is the process of removing these accumulated pieces or grass material that did not decompose over time. This is ideally doable using a Dethatcher, a lawn Scarifier or a rake.

What is the best time to dethatch your lawn?

Type of grass used in the lawn

There are many different lawn grass types, as previously mentioned, all these grasses accumulate thatch with deferent rates or quantities. Some grasses are more prone to a fast buildup of thatch, while others collect it at a slightly slower pace. The most common types known to have a higher rate of increase are spreading grasses, including Bermuda grass, Kentucky bluegrass, and creeping fescues. The other grasses, such as tall fescues and perennial ryegrass, which are clump-forming grasses, are slower in accumulating of thatch. This means that the vigorous spreading grasses require frequent dethatching due to faster rates of thatching while the clump-forming counterparts handle thatch pretty well, resulting in a lesser need to dethatch the lawn frequently.

Other factors, such as PH levels of the soils that your lawn grows on, contribute to determining when to dethatch your lawn. Low levels of soil PH are considerably favorable and prone to thatch accumulation much faster than the soil with higher levels of PH; therefore requires frequent dethatching.

Too much irrigation also causes your lawn to require more frequent dethatching and excessive use of nitrous fertilizer. Less mowing also helps in the accumulation of thatch, thereby resulting in the need to dethatch frequently.

The first thing taking note of before deciding when to dethatch. When the level of thatch is  available to the lawn grass that is the perfect time of dethatching. Assessing this is quite easy as simple garden tools such as a garden trowel or a garden spade are instrumental. They are for digging a small part of the lawn to allow you or the gardener to see and measure the level of thatch accumulated vertically. After this, it is easier to determine the inches, and if they exceed the healthy mark of half an inch, it is essential to note that dethatching the lawn is now a requirement.

As we mentioned earlier, that grass type has a lot to do with determining when to dethatch the lawn. An ideal time for each lawn or grass type is during its times of peak growth. This is because quick recovery of the lawn is essential, and during the peak growth time or season where there is more active grass growth is an ideal time for detaching your lawn. A generalized rule of thumb requires or slightly advises that it is better to thatch after the lawn has mowed three or more times during that active growth season.

The favorable season for dethatching

Generally, springtime is the most favorable and ideal time of year to dethatch; however, it varies depending on the grass type of the lawn you want to dethatch. Grasses that are commonly considered cool-season grasses such as Kentucky bluegrass, rough bluegrass, fescue, and ryegrass require the gardener to dethatch them around late summer or early fall. This is when they experience the best active growth, and they have more than enough time for recovery after dethatching before the arrival of the frost season.

Grasses in the bracket or class group of warm-season grasses, including Bermuda, centipede, Bahia, St Augustine, Zoysia grass, to mention a few, usually require dethatching during the times of early spring and also during late summer. It should, however, be after spring green-up. This is because early summer, where there is a peak in the growth of the lawn grasses.

The most crucial point to consider as it can also serve as a warning is that dethatching should never occur when the lawn is relatively dormant or considered stressed. Dethatching during these phases or periods has catastrophic risks, resulting in permanent damage to your beautiful lawn.

How to dethatch the lawn effectively?

When you have been considered all the above factors for when it is ideal, there are tools, which are usually used for dethatching small lawns. These include specialized dethatching rakes, power rakes, and vertical mowers, to mention the most common ones.

Before embarking on the exercise of dethatching, you should make sure that the lawn is around half of its average height. When using a dethatching rake, it is almost like using a regular rake because the blades dig into the lawn and, due to their curved nature, pulls up the thatch after loosening. It is ideal for thatch that is reasonable and thin.

Using a Dethatcher, which can also be rented, special care is essential in sprinkler heads, utility lines that can interfere, to name a few; but if it is rented, you must take it with the correct spacing and cutting depths for your grass. Also, having help is advisable as it is heavy.

Why should you dethatch lawn?

A good gardener should always have a solid reason why dethatching is necessary for his or her garden. Dethatching is not still needed in some cases because thin layers of thatch can be beneficial to the nourishment and growth of the lawn. This is because a reasonably thin layer of thatch that can approximately be less than half an inch can provide benefits as it can act as an organic mulching material for the lawn. Mulching refers to a layer of material that insulates the soil from drying up due to extreme or high temperatures, thereby maintaining plant normal temperatures in the soil. Mulch helps preserve moisture in the ground and ensures that water intake and nutrient intake are optimum.

However, thick thatch layers of more than an inch can be more problematic, to the health and care of your beautiful lawn, than beneficial. Besides the apparent reason that thick thatch removes the appealing effect on an otherwise green and beautiful lawn, there are other more severe reasons which will motivate you to dethatch your lawn. These include the ability of the thatch to harbor destructive pests and insects, which feeds the grass.

After dethatching the lawn, overseeing that it gets back on track regarding its thickness, green color, and attractiveness is essential. Processes like aeration should also take place to promote fast recovery. Dethatching is very important in maintaining and retaining the beauty of your lawn for more extended periods as it supports good drainage in terms of water and nutrient intake. It also encourages proper aeration for microorganisms in the soil and acts as a catalyst in decompositions of dead grass, further enriching the soils. 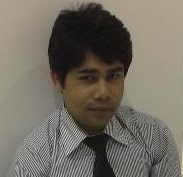 Poweredgrip ensures an expert team of writers, to provide you with excellent informational and unbiased content. We are dedicated to giving you much smoother and best up to date information. We share the incomparable tricks, tips that give you awareness and confidence for making your buying decision. We are a very enthusiastic, dedicated and hard worker. Kazi Taslim is the Author and Editor of our experienced writing team. 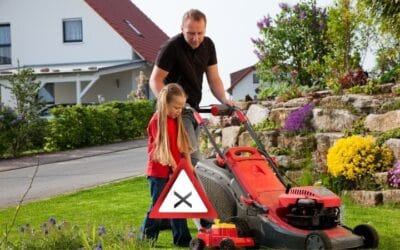 Lawn Mowing Safety Tips | To Know Before You Mow

Mowing your lawn is one of those "macho" chores that are generally regarded as masculine. The whole idea of crank starting the mower's petrol engine and getting all sweaty pulling and pushing it forth makes one feel invincible. "What could really go wrong?" you might... 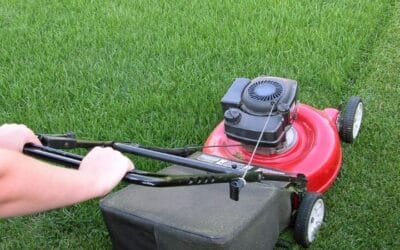 When to Start Mowing Lawn | The First Cut of The Year

Lawn mowing is not an event confined to a specific calendar date. Instead, you should monitor your grass length and mow only when necessary. Every homeowner or gardener needs to know when to start mowing lawn to maintain a clean and neat grass cut. This article will... 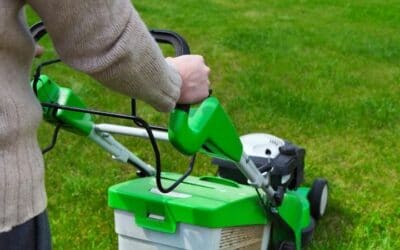 How Often to Mow Lawn: Guide to Avoid Mowing Mistakes

It is said sweet comes from sweat. The same goes for achieving a good lawn. You do not just wake up one day and see a beautiful lawn in your yard. You need to maintain your lawn if you want it to be healthy and beautiful. Mowing grass is a must-do if you're going to... 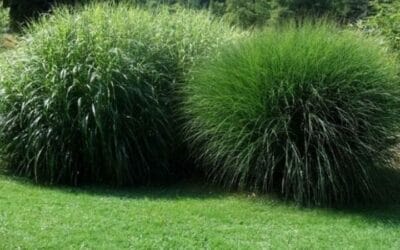 If you want to achieve a healthy, lush lawn, it is essential to properly plant your grass seed. Proper timing will allow your grass seed to germinate well and get established well before unfavorable weather conditions and stresses come. If your planting season aligns...

When to Aerate Lawn I Complete Lawn Aeration Guide

Lawn aeration is vital for the reduction of turf's thatch layer and for combating soil compaction. For the aeration to be adequate, you must carry it out at a specific time depending on a set of conditions, including the cultivar or type of lawn, weather... 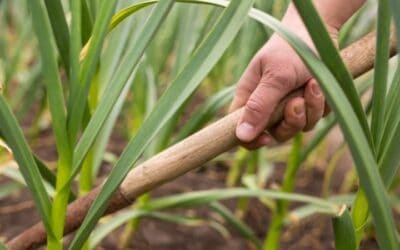 As a gardener, you could spend a lot of time and effort on nurturing your lawn. While helping it reach its optimum potential, on the dawn of your contentment, you notice the presence of weeds, which seem to be thriving. Weeds are not as friendly as they could disturb...